To provide fair and transparent withdrawals after the staking period and prevent any significant “supply shocks,” we have decided to introduce a concept of Cooldown windows for user withdrawals. There will be a fixed amount of assets (such as ALBT) that users will be available to claim every 24 hours for each contract. The time will be measured in blocks. If the amount of tokens to be claimed is exhausted, users won’t be able to claim but will instead be put in a “cooldown” queue. 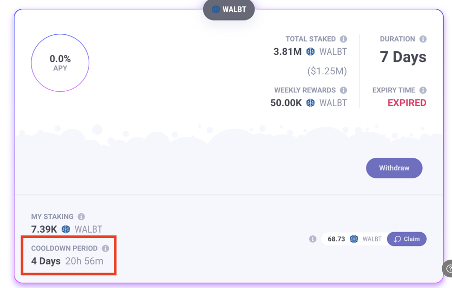 Users are able to see on the dashboard in the left bottom corner of the expired campaign how much time is left until the cooldown period is ends. Once this cooldown period is completed, users will be to claim their rewards and tokens.